What I will describe here are the understandings I have come to regarding the nature of spiritual awakening. These were principally formed from my personal encounters with the Divine, with my experiences being rounded out and explained by spiritual texts and teachings. In my journey, I have come to see that awakening has three dimensions, or facets. Each dimension exists in its own right but is inextricably connected to the others. Awakening of one dimension does not automatically mean awakening of the other dimensions. (However, awakening of one dimension can greatly assist in awakening the other two.)

The three dimensions correspond to mind-heart-body, or absolute consciousness, love/bliss, and physical existence. Each dimension expresses its own “flavor” or aspect of non-dual reality.  While we customarily say “awakening of…” it is more precise to say “awakening of and as…” since when you awaken, you are that to which you have awakened.

The primary tool used by most spiritual teachers for this awakening is meditation.  Again, meditation has various meanings, but in this case it refers to self-observation of the mind. How we go about the awakening of consciousness on my path is somewhat different, and that is discussed in more detail in “Woman, Goddess and Savior.”

Awakening of and as the Heart (Love)
As consciousness is an irreducible fundamental dimension, so too is love. By “love,” I mean agape: selfless love, unconditional love. Not love for something, as in romantic love, but love without an object, love as a universal force or energy in its own right.  This love has none of the sentimentality associated with the egoic love we are  accustomed to in romantic and familial relationships. It is a felt state of being that permeates our existence.
Humans experience this love in the heart—not the physical blood pump, but an esoteric heart that seems to reside in that same general location. As we grow deeper in our spiritual practice, we can feel the presence of this Universal Love energy and its animating quality, and increasingly we respond to its call rather than to the selfish demands of our ego.

Virtually all religions have at their core some version of the Golden Rule, the Law of Love. Treat others as you would want others to treat you, love selflessly. Spiritual practices to awaken this dimension of the Divine often center on sacred service to others and visualization meditations in which this devotional love is offered to the Divine as well as to others.

Awakening of and as Eros (the Body)
Eros is the life force energy. It animates all living organisms. Sometimes people think of Eros as sexuality, but sexual energy is only one expression of the life force. As used here, Eros is the totality of the life force. Our bodies and minds want to live—to move, feel, explore, procreate, eat, relate, experience. So too, there is a fundamental animating force of creation by which the Universe evolves and moves, the impulse to birth the particular out of the unconditioned, Eros as a fundamental quality of existence.

In our lives, we feel separate from all else that exists. I am me; nothing else is me. In this way of thinking, eros is experienced as a very personal force or energy, unique to the individual body. Just as the unawakened person experiences consciousness as a personal attribute, so, too, do we feel that our bodies and life energies are our own.  But our personal eros or life force is but one expression of the universal life force, the one Eros that is an irreducible dimension of reality. As we grow spiritually, we can sense and experience that universal Eros, bring it into harmony with our personal life force, and allow it to overtake our body, cell by cell by cell. Our actual bodies become infused with the Divine. The body itself becomes Holy and of God.  This is a far cry from those Western religions that have long preached that the Spirit is Divine, but the body is profane. In the way that I teach, everything is an expression of the Divine. The awakening of Eros is the true merging of Spirit and matter.

We could visualize these three dimensions of awakening as a circle. 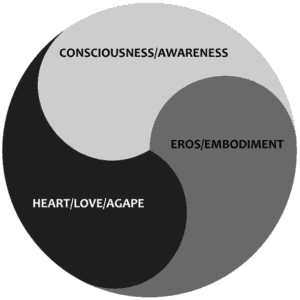 In the path that I teach, full awakening takes place only when you have awakened to all three of these dimensions. The ultimate outcome of each of these three facets of awakening is the same: the merging of personal experience and existence with the Universal. Personal love becomes Universal Love. Your consciousness becomes the One Consciousness. Your life force, your eros, becomes one with the Eros of the Universe.  Nirvana and Samsara are one. Atman is Brahman.  Beneath the apparent diversity of existence—the plethora of forms that seem to constitute the universe—there is a dimension of oneness, the primordial foundation of existence. Each of the three awakenings opens us to one dimension of that un-manifested, uncreated stillness. Different spiritual paths have various names for this esoteric domain. I sometimes call it the Eternal Infinite Oneness (EIO). In this dimension, there is no self and other, no “me” or “it,” just the oneness. This domain can be experienced but not spoken or described. Yet it is the “home” that has been calling to us over the ages.”